After over 13 years on the microphone and behind the music, clearly I have a lot to say and wisdom to share! Jumping into the forefront of the social media and content creation space and in front of the camera gives me a chance to connect deeper with YOU. Here I’ll share my expertise in branding, marketing and entrepreneurship as well as my passions for travel, music, lifestyle and culture with a growing and dynamic multicultural/ millenial audience. Let VJMedia help elevate your brand message, engage millennials and connect deeper with her organic reach! Don’t see exactly what you’re looking for below, no problem, let’s chat about a solution to help with your specific brand needs! Thank you in advance for the opportunity.

If you’re looking for:

How to Book Me For TV/Radio, Voice Over or Brand Campagin

For All Media and Publicity Needs:

All Other Inquiries, Press/Travel Coverage, Site Rates and Internships, connect with Vanessa here 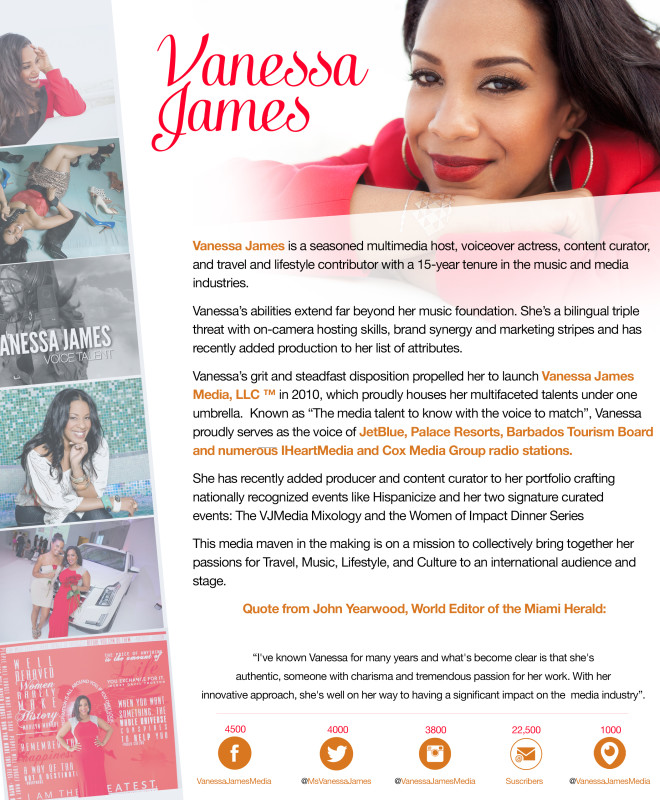 Vanessa James Media is a comprehensive and interactive company which leverages her versatile talents in social media, radio and music, travel correspondence, television, digital media, lifestyle events, product endorsements, event promotion, and voice-overs. After years of networking in the marketplace and the urge to expand the reach of the VJM brand, Vanessa created the annual #VJMediaMixology: South Florida’s premiere signature event celebrating the VJM brand while connecting brands, bloggers, influencers and media. The event recently wrapped with tremendous success and press after a collaboration with auto giant General Motors and Cadillac and received national recognition by Nasdaq, Miami.com and Forbes. Vanessa has also been honored by Miami.com as one of the Soul of South Florida’s “Person’s to Watch” in Miami. Click here for article.

With her strong connection to the Caribbean, impeccable industry relationships, and her general market mass appeal, Vanessa added a few new stats to her resume recently. She’s collaborated with several tourism boards including:The BVI (British Virgin Islands), Jamaica, Cancun, Barbados, Antigua, and Trinidad to serve as a social media ambassador for several music festivals and lifestyle events as well as written correspondent for several tourism pieces centered around carnival and Cropover in Barbados. She recently contributed to 10BEST and  USAToday to cover the Latin heartthrob Ricky Martin’s show in Cancun for the launch of Moon Palace’s new concert facility. Vanessa has also served as a social media ambassador and livestream host for well-known Caribbean events including: Jamaica Jazz & Blues, Carnival Miami, BVI Music Festival, and more.

As it relates back to South Florida, you can catch Vanessa leading the music platform for the biggest US Hispanic conference nationwide: Hispanicize; The Latino trendsetters and news-makers in social media, marketing, entertainment and innovation).. The leading trends event for all things is a 5 day experience in which Vanessa curates the entire music experience with event co-partners Katherine Johnson and Manny Ruiz. Vanessa was also recently tapped by General Motors and SheBuysCars to curate a leading social media panel for budding entrepreneurs and content creators called Hack YOUR Social in which she teaches ways to elevate your digital footprint and presence.

2016 is in full swing for Vanessa James Media. She’s adding more television hosting, producing, blogging, and speaking engagements to her resume with the launch of Carnival to the World; a new travel show currently in production with SteadyImage Productions. The shows will showcase Vanessa’s voiceover and storytelling skills, on-camera talents and overall personality while tapping into uncharted territories including music, culture, local food, new media, lifestyle, art, carnival and fashion.  As you can see, this media maven is just getting started and we thank you for your continued support throughout of the VJMedia brand.