My recent visit to Cuba; what to know before you go.

90 miles off the coast of Miami sits an island that has contributed to an entire culture within the Latino experience. Cuba, the concrete jungle in the middle of the Caribbean, is a country that is simply hungry and ready for change. A place famous for it’s bonita bandera (flag), diverse culture and political instability, Cuba has many treasures that go far beyond the naked eye. Most have yet to visit the island, but as the travel restrictions have been lifted with President Obama’s recent moves, you’ll want to get ready to experience it for yourself. Keep it mind, you’ll have to be prepared for what to expect!

Taken atop Earnest Hemingway’s famous hotel and library, here’s a shot of Havana.

I recently had the pleasure of visiting Cuba and what I found was nothing short of amazing. It’s as if I boarded a plane and traveled back in time 50 years to a place who’s cobblestoned streets, concrete houses and scents of communism still hold strong. In a sense, Cuba is desperately in need of change, to which its people long for and deserve. Our taxi for the vacation to Varadero. You can spot these classic cars throughout the island. Cabs cost an average of $10 USD per trip. 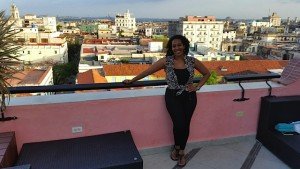 The rooftop of the Earnest Hemingway hotel. He came here often to write and relax. 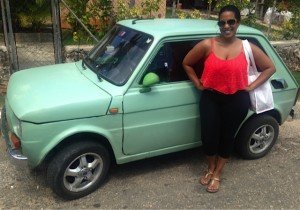 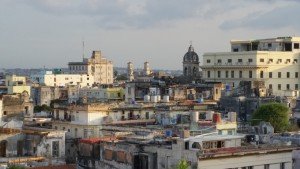 Upon landing in Havana, (La Habana), immediately your eyes are overcome by the symbols of communism that line the streets. The infamous monarchs of Castro and El Che’ are ever present from the moment you leave the airport. Heads up-you will take a few deep gulps as you quickly realize that you’re “not in America anymore”. Once you move past the obvious you quickly discover an island that’s as bustling as any in the Caribbean. As you can imagine though, in many ways it is still behind by a few generations because of its polarizing politics. An old building in La Vieja Habana. Old concrete banisters seem to be on the brink of faling, but they still hold strong.

One trip through the busy streets of Old Havana and you can see why it’s no surprise that over 65 years ago Cuba was coined ‘The Las Vegas of the Caribbean’. There’s still evidence of that period of nostalgia when Cuba was a bustling playground for Miami’s rich and global jet-setters. The architecture speaks loudly as you walk the streets of La Habana. Look past the chipping paint and concrete, and you’ll find grand structures with Italian and European influences on every corner. It’s clear to see that although poverty stricken now, where the majority of Cuba’s citizens live on just $30 dollars per month, this was once a lavish playground for tourists and many native Cuban’s themselves.

One thing that remains true is that ever present “Cuban hustle and charm” by the locals that you simply can’t miss. I think it’s part of that deep Caribbean bond and spirit that we have; that work hard play harder mentality. Much like other Caribbean cultures, Cuban American’s in Miami and across the world have definitely maintained that characteristic from across the water.

So with camera in hand, I set out to explore Havana with my own eyes and to gain my own perspective. I had heard so many conflicting stories on what to expect, what to watch our for, what not to eat, and the list goes on and on. I managed to grab a few amazing pictures from my incredible experience to share with you. Before you venture to the island known for its classic charm, rich history and warm friendly people, see a glimpse of what’s in store. Vieja Habana.. Yes- there are still donkey carts there and they are still a mode of transportation for many in Cuba.

Varadero; get transported back to the 50’s with classic cars, blaring salsa music, dominos parks and cigar bars in quiet town about 2 hours east of La Habana. Varadero and its beaches are rated top 10 in the world for good reason. Basically untouched and undiscovered by tourists, you’ll pick up on the classic charm as 1957 Chevy’s and vintage Ford’s pass you by. You’ll find decent hotels from as low as $35 dollars a night and cozy restaurants called “paladores” where a couple can catch a delicious Cuban dinner for under $15. The Beaches: Much like its neighbors Jamaica and the Cayman Islands, Cuba boasts incredible beaches, (some of which have made the Travel Channel’s Top 10 in the world). The island is littered with cozy beach bungalows and villas that for the average traveler is quite affordable. Most start as low as $40 per night and now with modern hotel chains set to begin on the island along with Air B&B, you’ll have even more choices to take in the city. The famous Varadero Beach is sure to be one of the islands hottest attractions. Beautiful from end to end.

The travel season is here and if you’re like me, you’re looking for something new, exciting and different to explore. Let’s be honest, a cool Caribbean breeze, sun-kissed beaches, and rich culture is never an overrated situation to dive into. I highly suggest you take advantage of the new travel laws that allow you to travel directly from Miami and Orlando to Cuba. Before you go, know this: Bring everything! There’s a shortage of everything from internet to toilet paper, so don’t assume that you’ll find it on the island. If you can pack it, bring it with you, but go! Go to Cuba with an open mind! You’ll enjoy yourself and what you’ll bring back is a world of new memories and perspective with you! Hellshire Beach, Jamaica. Famous for its freshly picked lobster and Red Stripe beer. Get it on your calendar for your next visit.